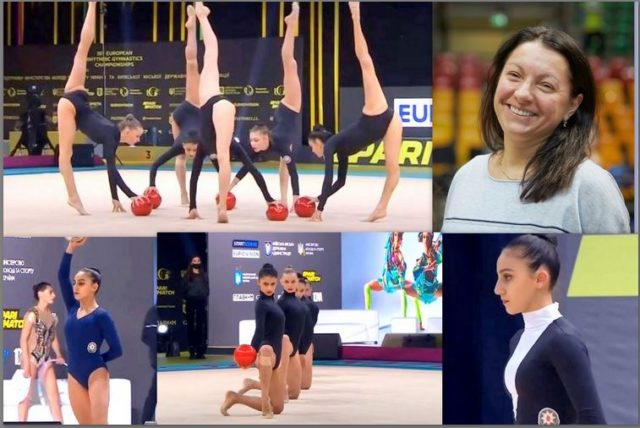 In an unusual 36th European Rhythmic Gymnastics Championships, which ended in Kiev on Sunday 29 November 2020, many were the surprises we witnessed.

As for the show on the platform, we were pleasantly impressed by the Azerbaijan Federation which presented its exercises with Leotards who have a lot of interest in the people of world rhythmic gymnastics. Accustomed to Russian excesses, we wonder if this way, this “return to the past” could mark a trend in the near future. The lack of excesses in the style of the Leotards allowed everyone to be focused on the form of the exercise, not having to pay attention to anything other than the form and movements of the gymnast.

We at RGNews contacted the Head Coach of the Azerbaijani team, Mariana Vasileva, who very kindly agreed to answer our questions about the championship just ended, the difficulties overcome, the future and of course the choice of the Leotards.

Mariana Vasileva, are you satisfied with the results obtained by your team?

Of course, I am content with the results of our team. First of all, I am content that we managed to maintain the health of our gymnasts and the whole staff of our federation. We were able to take part in the 36th Rhythmic Gymnastics European Championships with a full composition.

We all go through hard times due to global pandemic and not all the federations could join the event. Of course, this European Championships was historical one for several reasons. Despite of cancellation of events in a number of sport disciplines, this Championships was retained and held during the global pandemic. I am very grateful to the European Gymnastics, which did everything in its power to organize this competition, as well as the organizers, who placed high emphasis on each participant.

We had a meeting with gymnasts, coaches and choreographers yesterday after our return to Baku. We discussed our advantages and disadvantages which we will take into account in our trainings.

What did you think when many Federations withdrew from this European Rhythmic Gymnastics Championship?

As I mentioned before, gymnasts from some countries failed to take part in the Championships for various reasons: injury, sickness, concern for health and safety.

From the strongest countries in gymnastics, for example, Russia, Italy, Spain and other countries did not join the events. Of course, it is a pity that the Bulgarian and Belarusian teams in group exercises did not take part while their individual gymnasts competed in. I think that their absence was felt at the Championships because they have their own specific style, and they could bring more bright emotions. Unfortunately, the Scandinavian countries did not participate in, as Finland always demonstrates very bright performances.

What was the most difficult thing in preparing for these European Championships?

First of all, I would like to say that we have started preparing for this European Championships after the qualifying World Championships held in Baku in 2019. After this event, we knew that we qualified for the Tokyo Games both in individual program and group exercises. We started to develop our strategy and think about how to prepare, so that the European Championships was part of our preparation for the Olympic Games. But as you know, due to the pandemic, the physical preparation of the whole team was prevented.

We had a strict quarantine in our country from the beginning of March to June but we prepared online, the girls were engaged in choreography and physical training. All experts will agree with me that maintaining the good form is difficult in such conditions. There are also advantages. We all started to cook. All the coaches showed that we can easily do household things besides coaching.

At the first stage of preparations for the Championships and the Olympic Games, I changed the team composition in group exercises. After the Championships, I was completely convinced that it was a right decision. Of course, we have reserve gymnasts who are preparing in the second line-up.

I think the most difficult part of our preparations was to prepare psychologically as we did not know exactly whether the Championships will be held or not. This Championships enabled us – not only our team, but everyone who took part in the European Championship, successfully complete this year.

Another issue was the maintenance of health of our gymnasts. As we know, if one person in the team gets sick, then there is a possibility that all other members of the team will catch it. We did our best to keep them safe and they were training at Milli Gimnastika Arenasi (National Gymnastics Arena) in isolation. The girls, from June 1 till returning to the homeland after the Championships, met with their parents just 2-3 times. And when they met on the territory of the Arena, the parents, of course, were wearing masks, gloves. It was also difficult psychologically. I am also grateful to the girls, coaches, who did not leave the Arena all this time. I am very grateful that athletes of National Teams in Olympic sports were allowed to train during the difficult times due to pandemic.

How do you see the competitions for next 2021?

I am an optimistic person. I already imagine how we all meet, without hugs and by keeping social distance of course. But I imagine how I meet my colleagues at the first World Cup in early April, the second, the third which we host in Baku.

How I meet, as usual, all our guests. Our arena misses the competitions, we are used to living at a very dynamic pace. We miss all these competitions we hosted in Baku, and not only in Rhythmic Gymnastics, but also in other gymnastics disciplines.

The fourth final World Cup in Rhythmic Gymnastics will be held in Italy, then we have the European Championships in Bulgaria. Afterwards, we will perform in Tokyo, and the cycle will successfully be completed. We perform at the World Championships in Japan, and then we have a vacation. This is how I imagine our near future days. Let’s think positively.

On Friday, after seeing the Leotards of the Azerbaijan national team, rhythmic gymnastics fans around the world have rejoiced .How did you choose to bring on stage the simplicity? Was this decision deliberate or is it due to a “forced” choice?

I made this decision at the end of 2019. In our modern gymnastics, we need something special. And when I was a gymnast, a generation before me, everyone performed with such simple leotards.

We all remember the same World Champions, European Champions of the 80s of the last century, who also performed with such simple leotards. I like everything simple, and everything simple is the greatest thing in the world. I now understand how much people needed it.

Why were these colors chosen? This is a separate issue. On social media, I saw that many people associate our black leotards with the war that just ended in our country. The black leotard is a symbol of the lost souls, the people of whom we have lost. Some of these people were lost at the war, some during a pandemic, some for various other reasons.

I am very pleased that people are looking for an idea in our leotards and exercises. At first, I had the idea to let only gymnasts in group exercises go in such simple leotards, and then after testing, I realized that Zohra Aghamirova should perform in this style as well. This gymnast is a very interesting gymnast. The work that she did all this time brought her exactly to this level. This morning I reviewed the performances of the girls and realized that we do not need sparkles, stones. Of course, everyone has their own right. I think everyone noticed our exercises.

We are used to seeing Leotards full of superficiality. What did your girls think when this look was proposed?

It was a year ago when I informed the team of my idea. Of course, many agreed despite the fact that I saw a doubt in the eyes of many of them. There were coaches who said maybe it would be better to put some stones or a strip. But yesterday, when we were discussing our future plans, I looked into their eyes and realized that they would not have any doubt in my next decisions.

I would like to tell everyone that I am very pleased that we have very good relations with the Italian National Team. I am pleased that you have contacted me to have this interview. I wish your team not miss a single start in future, as it is necessary for the leaders to guide people how they should work. And your Head Coach Emanuela Maccarani is always showing something new and we learn a lot from her. I wish everyone good luck, enjoy New Year holidays and the main thing is that to be healthy.

We provide you with the latest breaking news and videos straight from the rhythmic gymnastics word.
Contact us: squale@ginnastica-ritmica.eu